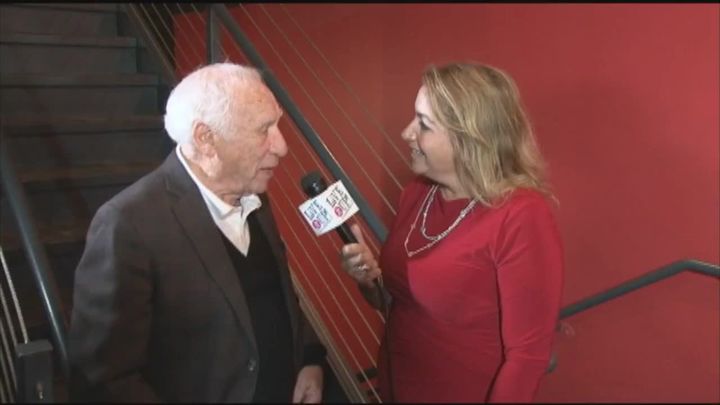 Live it Up with Donna Drake and Mel Brooks and Nicholas Brooks from the new film, SAM

Sunshine Cinema hosted the New York City premiere of a feature film by Nicholas Brooks. Mel Brooks talks about the pride he has in his son. Fun night. From IMDB:
The son of comedy legend Mel Brooks, Nicholas Brooks has worked in the entertainment field for over 20 years.

His first screenplay, Pumped!, was optioned by MCEG Entertainment (Look Who's Talking, Look Who's Talking Too, The General's Daughter and Basic Instinct). His fourth screenplay, Bugwars, has been purchased outright by Brooksfilms Ltd., and is presently in development with Brooksfilms. He continues to be active as a screenwriter, focusing on genres as diverse as thriller, comedy, horror and science fiction.

Mr. Brooks has also worked as a story editor for Brooksfilms Ltd. for over twenty years. Brooksfilms Ltd., a creative force in the independent motion picture arena, is responsible for such acclaimed masterpieces as Frances and The Elephant Man. In his long tenure at Brooksfilms, Nicholas Brooks has assisted in the selection of projects as well as helped to oversee the story development of a number of notable motion pictures. These include The Fly, The Fly II, and Spaceballs.

Additionally, he has story edited and consulted for other motion picture development companies, such as Vestron Pictures, which, over the last quarter century, produced such notable films as Dirty Dancing and Young Guns. In his capacity as a consultant to Vestron, Nicholas Brooks gave creative and story input on projects such as Dirty Dancing, Big Man On Campus, and Promised Land.

He has written advertising copy, owned his own computer game company and has worked as a financial consultant, focusing primarily in the area of motion picture finance.

Nicholas is now working on several new story ideas for both television and graphic novels. He has recently collaborated on two teleplays with Craig Nobbs. Nicholas and Craig are presently at work on a third teleplay as well.